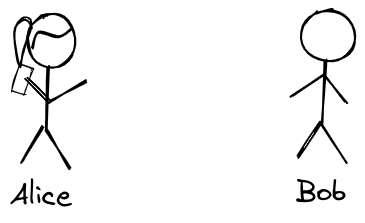 Alice and Bob have a mutual enemy - Eve.

Eve is notorious for eavesdropping on other people’s conversations and listening to all of their gossip. One day, Alice and Bob decide that they’ve had enough of Eve’s eavesdropping. They want to communicate in public, but in a way such that only they themselves can understand each other.

One way they can accomplish this is by speaking a different language that Eve doesn’t understand. Now, they can freely talk to each other in the open without worrying about Eve listening in on their conversations.

Similarly, cryptographic ciphers are another way Alice and Bob can securely communicate with each other. If they decide on a secret key on a slip of paper beforehand (similar to a password), they can encrypt all of their messages with that secret key. To Eve who doesn’t know the secret key, all of Alice’s and Bob’s messages are just random garbage that she can’t understand.

Now, all is well - Alice and Bob have found a way to talk without Eve understanding what they’re saying.

AES is the most widely used block cipher - it’s used to encrypt/decrypt messages with a given secret key. The length of the key and message must be multiples of 16 bytes; for the message, we can simply add a few extra bytes at the end; for the key, we can apply the SHA-256 hash function to produce a 32-byte hash.

The Python pycryptodome library offers a wide range of cryptography tools - try playing around with the code below!

Five years later, Alice and Bob have moved to different parts of the world. They can’t talk to each other in-person anymore, but they would like to communicate digitally. Unfortunately, Bob has forgotten the original secret key that they decided on, and (even after 5 years) they’re still worried about Eve spying on their conversations.

What’s different is that this time there’s no easy way to decide on a secret key. For example: 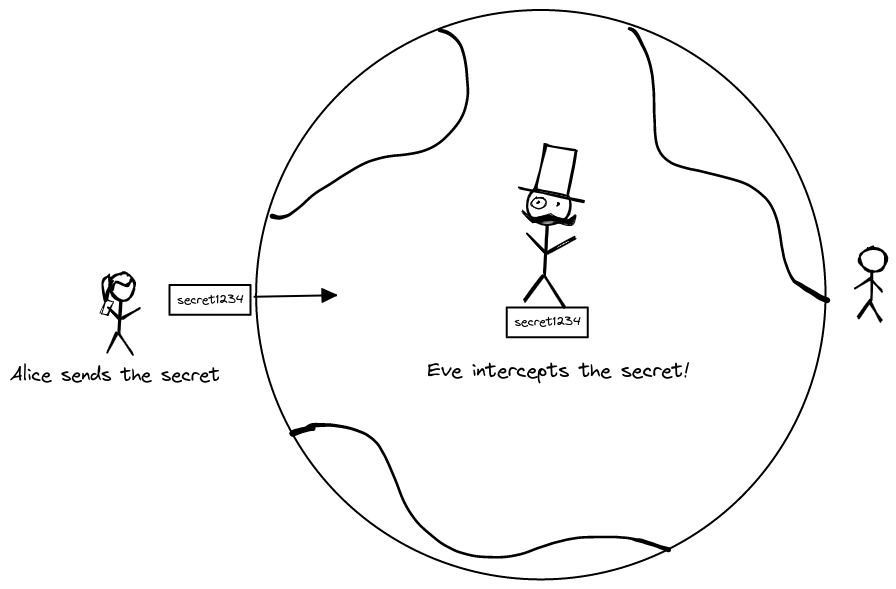 Think about this problem for a bit and see if you can come up with your own ideas. Is it possible to decide on something secret over a network where anyone can see what you send?

Yes! In fact, the Diffie-Hellman Key Exchange is one method for securely exchanging a secret key. Alice and Bob will each generate a “public” and “private” key - using those, they can then generate a shared secret that only they know. Even if Eve sees all of the communication between Alice and Bob, she can’t figure out what their shared secret is.

The Diffie-Hellman Key Exchange revolves around some mathematical concepts - but don’t be intimidated!

The process begins with:

$a$ and $b$ are Alice’s and Bob’s personal “private keys”. If anyone is able to guess or brute-force either of these private keys, they can recover the shared secret. Usually, $a$ and $b$ are on the order of $2^{1024}$, making it computationally infeasible to try out all possibilities.

Beforehand, Alice and Bob have publicly decided on the integers $g$ and $p$ - Eve will know these values.

The problem of finding either $a$ or $b$ in these cases is known as the Discrete Logarithm Problem. There are faster solutions than simply trying out all values of $a$, but they are still far too slow to find $a$ or $b$ in reasonable time. 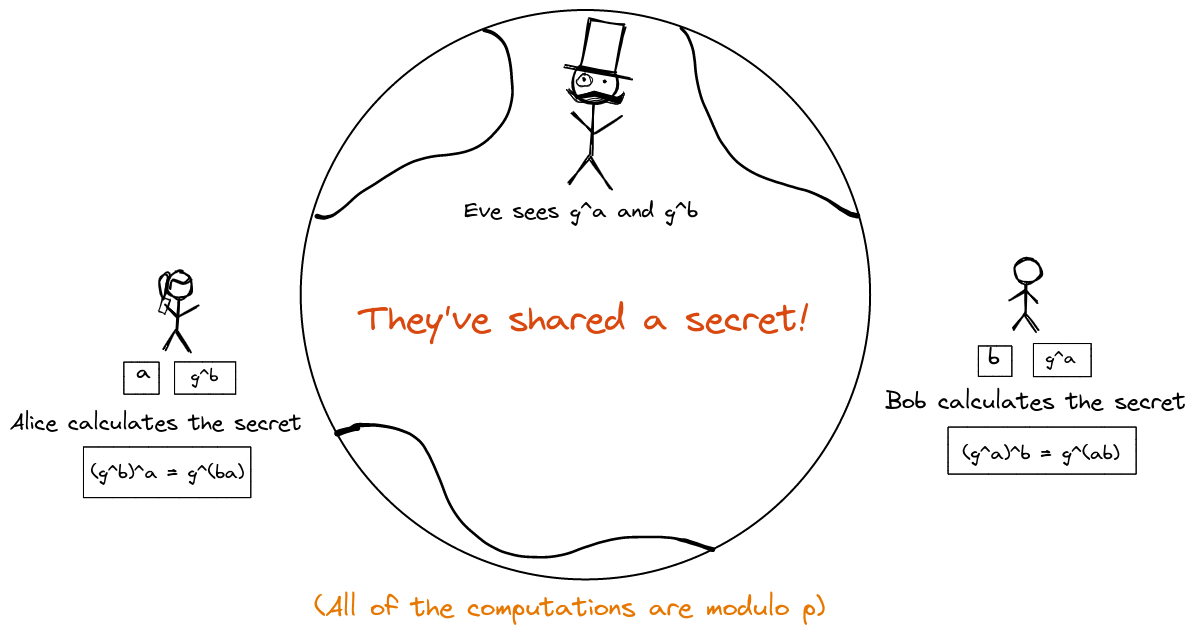 there is no way for her to find $g^{ab} \mod p$ because the Discrete Logarithm Problem is computationally hard and will take a very, very long time to solve.

Now, Alice and Bob can continue along their merry ways and use AES, with the shared secret as the AES key, to securely encrypt their messages (see Part 1 for details).

We started off with Alice and Bob - they wanted to communicate securely because Eve was eavesdropping on their conversations. We accomplished this by making Alice and Bob decide on a secret, then using a cryptographic cipher like AES to encrypt/decrypt their messages.

Then, we pondered how we could decide a shared secret if Eve could also eavesdrop on that process. Ultimately, the Diffie-Hellman Key Exchange came to the rescue - it relies on the Discrete Logarithm Problem being hard to solve. Even if Eve can see everything that Alice sends to Bob and everything that Bob sends to Alice, she still won’t be able to calculate Alice and Bob’s shared secret. From there, Alice and Bob can use a cipher like AES, as in the first part. 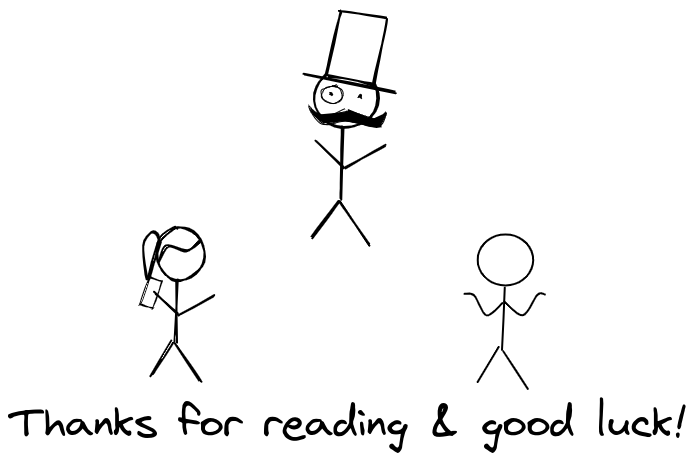