The entire infrastructure was hosted on GCP (thank you Google for the sponsorship) and brought up using Terraform. This makes it easy to bring up and down from one command, but it also useful for disaster recovery. All of the challenges services related to this CTF were hosted on a zonal GKE cluster.

As it is with any project on the cloud, you need to focus on the following:

I chose to run this on a zonal cluster due to a variety of factors. Because I wrote this infrastructure in Terraform, in the unlikely event of a GKE zone going down, I can easily move this to another zone with minimal downtime with just a few commands. GKE free tier also gives you one free zonal or autopilot cluster per month, so I took advantage of that.

The cluster was setup on two node pools. CTFd, MySQL, and Redis ran on one, while the challenges and monitoring stack ran on the other. This was to provide separation throughout the CTF.

I chose to make this a private cluster to reduce our surface area for attacks. As a result of this, all challenges and services that needed to be exposed to the public were behind GCP load balancers.

Given my choice to use a zonal cluster, the control plane was free. I only paid for the nodes that were up during the CTF, which I will go into later.

Everything related to the CTF it’s own VPC, while other services like our bastion ran on a VPC separate from the cluster but peered to it. There was firewalling between the two VPC’s so communication was mostly into the GKE cluster, with certain exceptions.

Our real networking costs was just under $22 ($21.99) with most of the cost being in GCS. Networking is a cost you cannot predict as you generally do not know how much traffic you will generate. Given the relatively low volume of traffic CTF’s generate, this did not pose an issue to us. A partial cost breakdown is shown below (only items with non-zero cost are shown).

All prices shown are in USD.

CTFd and it’s related services (MySQL and Redis) ran on it’s own node pool on GKE, using e2-highcpu-32 instances. There were a few issues I wanted to talk about.

I thought 1 instance of CTFd was enough, but it soon proved to be too little. I used the recommended number of workers to start off with, which is defined as (2 x $num_cores) + 1 on the gunicorn documentation. I had to up the node pool max size as well as the number of replicas from 1 to 3. After that, it was relatively smooth.

One issue we had was that there were a multitude of updates to our CTFd container, each of which required a restart. Initially, I had an error in my manifest where the update strategy was set to Recreate instead of RollingUpdate, which meant that on restart, every pod in the deployment would terminate on restart. I fixed that soon after.

don’t make the same mistake I did

To bring up the supporting services CTFd depends on, I used bitnami helm charts to deploy instances of MySQL and Redis. I configured them to use my existing secrets.

MySQL was deployed with a single master and 3 secondaries in case of any issues related to the database going down. With Redis, I had 3 masters and 3 secondaries for redundancy. With MySQL, I could easily pull backups from the secondaries and recreate our database in the event anything happens, like a GKE persistent volume getting deleted for whatever reason.

Challenges ran on their own node pool, using e2-highcpu-16 insances. It took two nodes to run all of the hosted challenges, with 2 replicas of each.

Each challenge had it’s own horizontal pod autoscaler (HPA). The baseline was set to scale up on <50% CPU usage based on the resource requests as defined in each challenge deployment, but that proved to be insufficient. Due to the challenges being finished extremely late, I was unable to have challenges be load tested. This resulted in the provisioned resource limits as defined in the challenge deployment spec being far too high for most challenges, resulting in the overprovisioning of resources. This also results in the HPA being useless in it’s base configuration.

Here is an example challenge deployment:

Disabling these would do no harm in our case, and you can do so by adding the following for a deployment:

I ran a single VM on compute engine: a bastion. Given that our GKE worker nodes were private, in the event I needed to access any of the nodes, I could do so using this bastion. This instance ran on a e2-highcpu-2.

It also served as our dockerd for our Jenkins instance. I didn’t want to run docker-in-docker on a Kubernetes cluster (it’s difficult and creates many security concerns).

The cost for running the bastion and GKE worker nodes came up to be around $140 ($141.73). All of our nodes ran on E2 instances, reducing cost while providing the required performance.

All prices shown are in USD.

I had 3 actions on this repository that ran on runners I hosted on my VM’s. Any updates to the cluster or docker images related to infrastructure were automatically applied on each commit. This ensures consistency as well as a history of any changes to the infrastructure. You can find more information on how to apply GitOps to your own workflows here.

Here is my action for updating the cluster:

I made a Jenkins instance just for this CTF using this bitnami helm chart. We had pipelines for building our challenges and CTFd. I configured the chart to use a custom jenkins-agent image.

I needed to install docker on the image as well as configure the image to use our dockerd instance on the bastion located at bastion.internal.ctf.maplebacon.org. The Dockerfile is as follows:

For debugging purposes, I brought up an Elasticsearch, Fluentd, and Kibana (EFK) stack using the bitnami helm charts for Elasticsearch and Fluentd. It’s analagous to the common ELK stack which consists of Elasticsearch, Logstash, and Kibana. Challenge authors could implement logging, and look for anything using Kibana, meaning that challenge authours wouldn’t need to install gcloud and kubectl to look at logs.

I created a custom image for fluentd and configured fluentd to parse and send logs in cri format. My Dockerfile and configuration for Fluentd is as follows:

Kubernetes logs are ephemeral, they will get deleted of a pod gets deleted. Having this stack up provides logs that persist throughout the life of this stack, enabling us to look at what’s going on at a per-challenge basis and look for anything suspicious.

The following example shows me looking at CTFd logs: 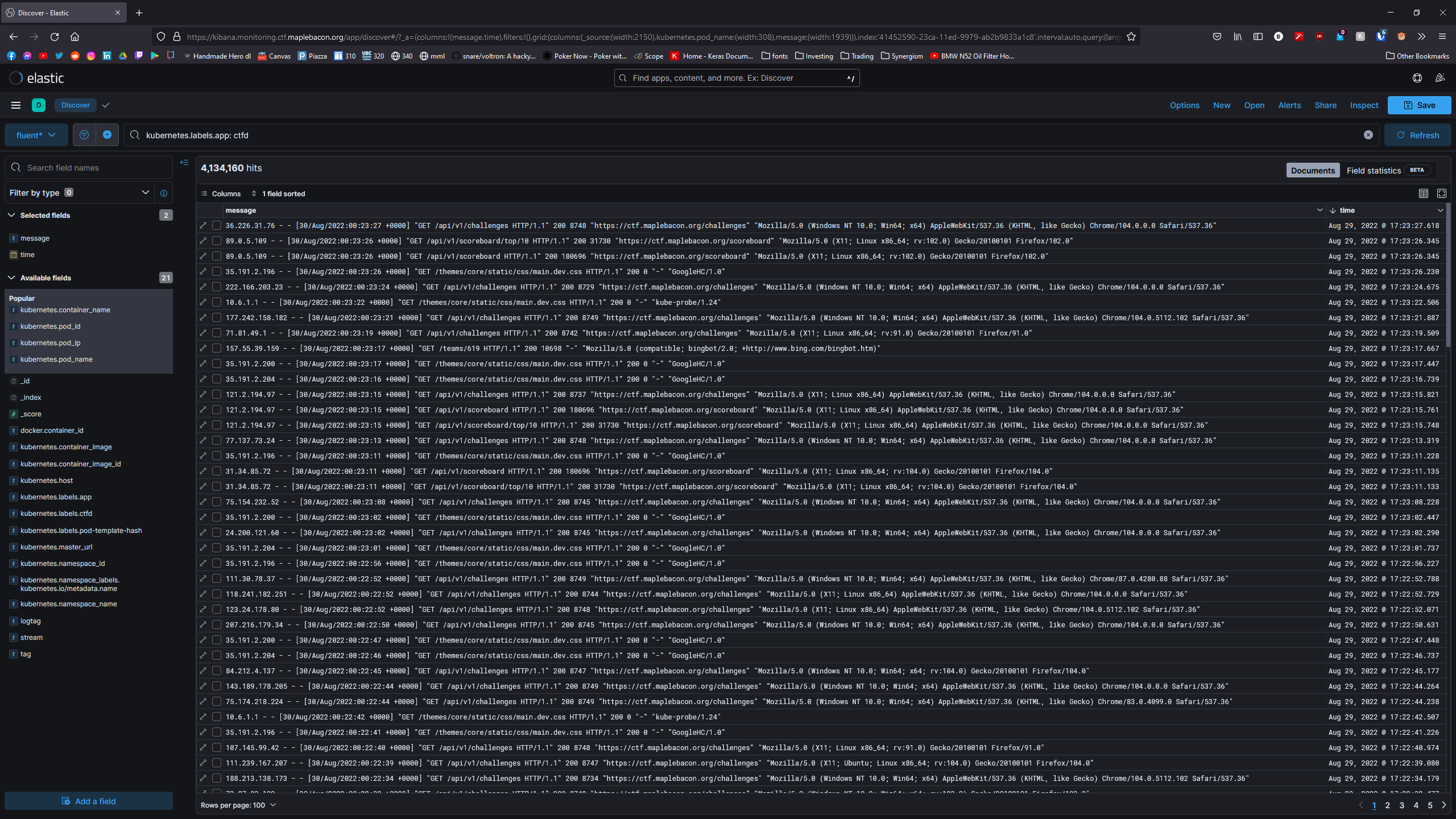 I also brought up prometheus on the GKE cluster using the community helm chart. Grafana was brought up with the use of the bitnami helm chart.

Grafana is a very useful visualization tool and I find it much more useful when compared to the GKE metrics that are provided. 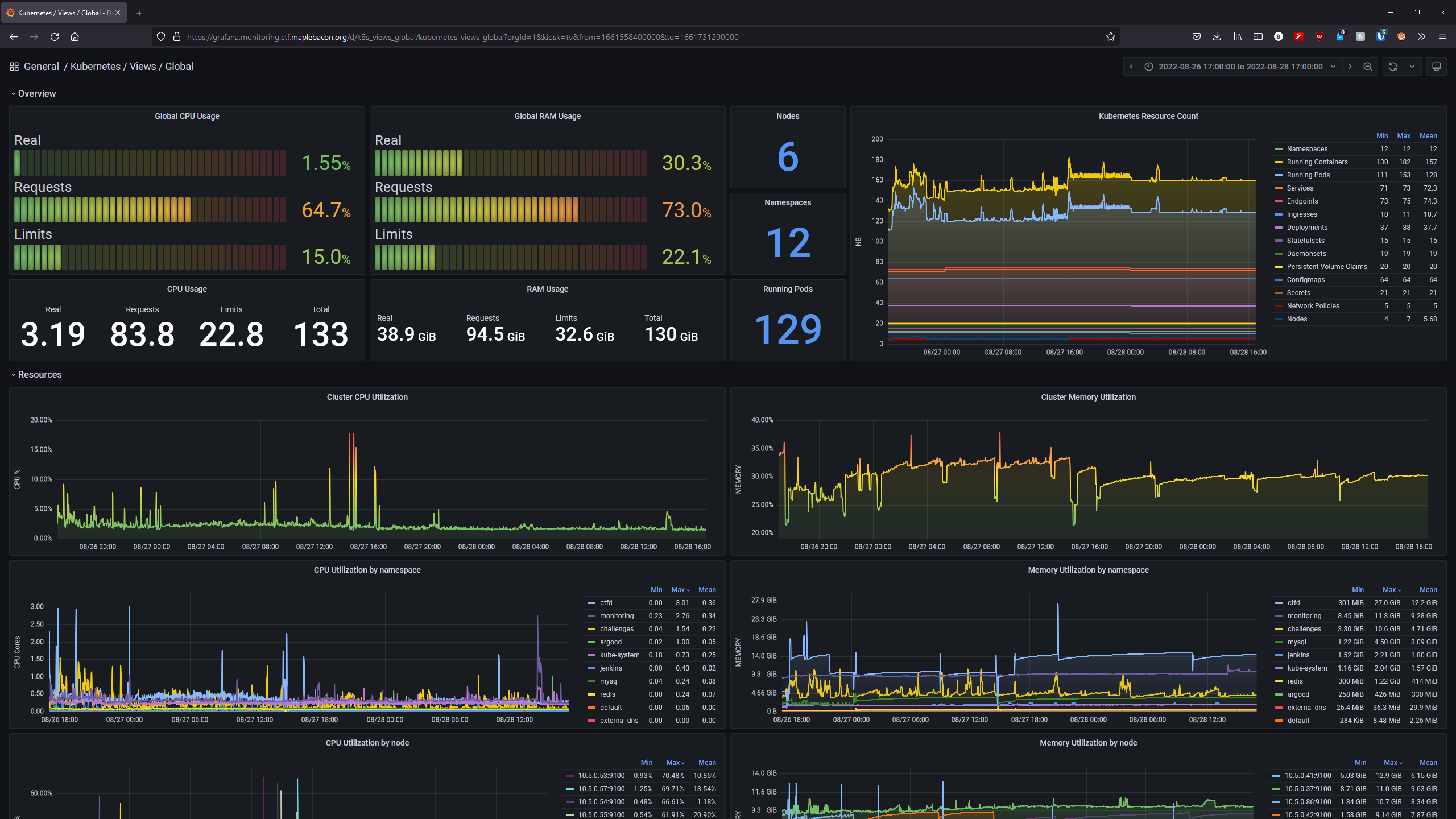 When you look at Grafana, you see that the CTF was VERY overprovisioned in terms of real CPU and memory usage.

Why I brought up my own logging stack

I brought up this logging stack because GKE logging is expensive.

Before disabling GKE logging in testing, I used 21 GB in a few days with minimal traffic! While the price charged also includes their analytics, dashboards, and storage, running my own stack was cheaper.

Storage is typically very expensive on the cloud. Excluding CPU and memory costs, I deployed a 100GB balanced volume for logging purposes which was sufficient for this CTF.

If you look at disk pricing, you will see that for 100GB of logs, bringing up your own stack is much cheaper:

Cost of the CTF

Running MapleCTF for two days was fairly reasonable. Our total cost came down to $181.33

What I would do differently for the next time

We had some downtime on CTFd at the beginning of the CTF due to the underprovisioning of resources as well as a number of updates to CTFd. I initially underprovisioned the nodes required for the beginning of a CTF, so for next time I will adjust the number of replicas and nodes CTFd runs on, at least for the start of the CTF. I also won’t make the mistake of using the Recreate update strategy for CTFd.

Having the challenges be completed very late resulted in no time to test the challenges. Because it was my first time running a fairly big CTF, I did not know what to expect load wise. This resulted in the overprovisioning of resources for the nodes that ran the challenges. I could have reduced the costs by at least 1/3 based on the metrics shown. Look at the following Grafana dashboard to see how badly overprovisioned this CTF was.

At a period of low usage, I had 1 node for CTFd running and 3 nodes for the challenges. Looking back at this, we could have easily ran all of the challenges on less nodes.

Overall, despite some issues I think we did well in running our first international CTF.

As a DevOps engineer, I am definitely aware of what I need to change for the next iteration of MapleCTF. I would love to have a chat with people about running CTFs on infrastructure that is maintainable, scalable, and cost efficient.