This is the challenge entitled “but I plaidiversed that already” from PlaidCTF 2022.

We’re given a web instance of a Terraforming Mars clone that’s been patched to add a “challenge” of winning 256 solo games in a row (with at most one loss allowed). Once this is complete, you get a flag.

It went unsolved during the contest, so the organizers offered a $100 USD bounty on the challenge to the first team to get the flag within a week.

Hold on, what is Terraforming Mars?

Here is a 29-minute video explaining how to play Terraforming Mars.

If that last sentence sounded unappealing to you, I respectfully suggest you save your time and stop reading this post. Otherwise, I’ll assume a general familiarity with the rules of the game.

A game in this challenge uses solo game rules, Corporate Era cards, and the Prelude expansion, which reduces the solo game length to 12 generations. You have that long to fully terraform Mars in order to win.

I played a few games to get a feel for the solo rules during the contest (mostly because all the other challenges were too hard), and figured that I could win maybe 50% of the time. Obviously, this made winning 256 of 257 games extremely unlikely, not to mention it took me 10 minutes on average to play through a game. I like board games, but probably not enough to play 40+ hours of the same game within a week.

The fact that there were no solves during the contest, and no other challenge was worth more points with static scoring, suggested that there wasn’t an easy exploit. That is, there wouldn’t be anything like pwning the server instance, or attacking a vulnerable SQL query to modify the challenge state - we’d have to get our hands dirty and actually play through 256 games in a row.

This did seem a little sadistic (even for PlaidCTF), and I’m not an ML engineer, so I didn’t think it was likely that I would be able to put together an AI for the game. Thus, I started poking around the game code to see if there’d be a vulnerability in the implementation itself.

I eventually found this issue on Github, which references a different expansion but presents the intriguing idea that preludes could be duplicated. Sure enough, in the initial card selection phase of the game, we can send a prelude array of two of the same card to the server without getting an error, and both can be played normally. Similarly, project cards weren’t deduped, so any strong card could be duplicated up to 10 times.

This was useful, but not that useful - certainly there existed some potentially game-breaking cards, like Standard Technology which could generate infinite money if four of them were played. But hoping for very specific cards wasn’t exactly a viable strategy, since there were checks to prevent selecting cards that hadn’t been dealt to the player.

However, this did get me looking at the part of the code that populated the player’s initial game state (comments added by me):

The comment of note here is the one in the prelude callback. Because the selected cards are appended, and there exists an additional parsing block after preludes for project cards, we can construct a query containing a valid corp, two valid preludes, and a bogus project card: 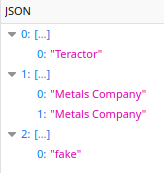 The query will fail, so the server will refuse to progress the game and expect us to try again, but there are now two additional preludes in the player’s hand which will show up when we ultimately send a valid request. This allows us to replicate and play an arbitrary number of the four preludes dealt to us.

Note that the same bug exists for project cards, but we can’t exploit it because there’s no way to make the request fail and prevent the game from progressing if we supply an array of valid project cards.

Also, this is technically a zero-day vulnerability because it’s in the live codebase here. This isn’t exactly the Linux kernel, though, and I mean…sure, you can take this bug and cheat at this board game playing against other people, but what exactly does that accomplish?

Using this exploit, we can hopefully generate enough money to make the game trivial. If we only generate money, we need roughly 750 M€ to do all the necessary standard projects. We can also replicate preludes that do terraforming actions, which makes the game much easier. The worst case scenario is a selection of four preludes that aren’t very useful, but we still should be able to do something like draw a bunch of cards to play or sell for more money.

OK, so we’ve finally gotten to the point where we can write code. The procedure is as follows:

This may sound simple, but of course there are myriad edge cases to consider. Some examples are:

And so on. To deal with all this, we could either do what the challenge author did, which is write a really good script to handle the vast majority of cases and manually play the worst-case scenarios, which takes a total of ~20 minutes. Or…

…we could write functions to handle the easy parts, and manually evaluate the harder decisions. I figured that if I needed to babysit a script that paused on unhandled edge cases, it’d be simpler for me to just run the actions myself.

For example, here’s the Python code I used to place all greeneries:

But I ended up using the following snippet in a Python REPL just as much, which places a single greenery in the first available space:

The important part of replicating preludes worked, though, so I got through all 256 games without losing once. At some point the sunk-cost fallacy kicked in, and I stoppped thinking about improving my methodology.

After the 256th win, the “continue” button becomes a “get flag” button: 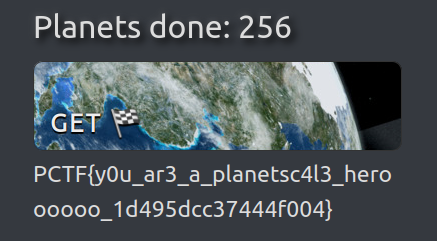 Wait, so how long did this take?

Like 12 hours. Not all at once, mind you - I did sleep and take breaks, and around game 175 switched hands for moving the mouse to save my wrists.

Easy games (e.g. where Donation was available) took under 30 seconds. Harder games with bad prelude choices took up to 5 minutes. I ended up averaging slightly more than 2 minutes per game.

Science cards are bad if you don’t care about victory points.

I probably should’ve used the provided script to run a local instance of the game, which would’ve negated server latency and allowed me to figure out a way to transition to new games without copying a new URL every time. If the challenge had been to play 1024 games, I hopefully would’ve realized that fully automating a script was the way to go…

Overall, this was still fun (and props to the challenge author for putting it together), because I wouldn’t have grinded it out otherwise. (I do have over 500 hours in Factorio, so this wasn’t an entirely new thing to me.)