This is the problem entitled “UTCTF Adventure ROM 4” from UTCTF 2022.

The problem description is as follows:

A game.gb file is provided.

Is this game on Steam

We can quickly verify that the provided file is a Gameboy ROM, so we need to… obtain an extremely legal way of playing the game. For me on my Ubuntu machine, this meant:

Both steps had the desired result, so we can begin playing (after a bit of Googling to find the controls). The game is a simple platformer, and eventually we find ourselves here: 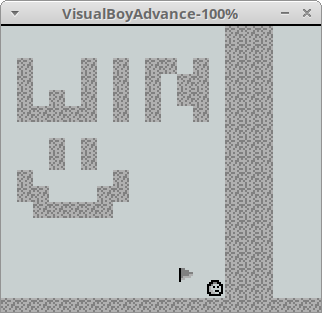 Touching the flag has no effect, and we can’t get past this wall, which given the problem description probably has something interesting on the other side.

Still no cease and desist in the mail

Thankfully, someone else has done the work of writing a Gameboy ROM disassembler for us: https://github.com/mattcurrie/mgbdis

Running this on our ROM outputs a few files, most of which aren’t very useful because they have nothing other than rst $38 repeated a few thousand times. There are functions that look interesting, and some of them presumably do things we might be able to modify like implement gravity and collision detection. However:

There was a section that stuck out, though:

which loads a ton of bytes into a contiguous block of memory. This suspiciously sounds like a mapping of the play area. Most of the written bytes were 0, so if we make an educated guess that 0 = free space and 1 = wall, maybe we can delete the wall next to the flag? Or read the flag from the map alone?

I ended up with this extremely legible and understandable script:

which ends up generating this (with the uninteresting bit snipped):

From top to bottom, we can figure out these are different levels in the game:

(Also, it looks like there are two bits assigned to each cell, not just one - probably because the flag cell is a third type that could be rendered.)

So we can’t immediately read the flag out (and all screens are weirdly flipped), meaning there’s probably some additional deobfuscation in the game. But instead of going through the effort of figuring all that out, what if we just cleared the walls that block us from our destination?

There’s probably a smarter way of doing this, but I ended up just writing 0xff at random places and regenerating the map until I figured out which map byte to clear. The modified assembly is as follows:

Now we simply have to recreate the ROM, which required another GitHub repo here. While building the new ROM, I got a warning saying Overwrote a non-zero byte in the global checksum, which a) made sense since the assembly was directly modified, and b) thankfully was just a warning, so no additional work to find and modify the checksum was required.

This took more tries than I’d care to admit.