Lorem_Ipsum gave nothing but a simple homepage that allowed you to see “animal”-ified versions of the famous lorem ipsum placeholder text.

Choose among the available animals, and notice a GET query parameter that looks something like ?animal=dogs. What if you gave it text garbage instead of an expected animal?

This is a Werkzeug debugger! What fun, since Werkzeug in development mode will give you a python console with every traceback that is reported to you when something wrong happens. Easy challenge, except -

The console is pin-protected.

The text made me wonder - it seems as though this pin, if such security measures are enabled, has a specific generation algorithm I could reverse. Good thing Werkzeug is open-source.

Truncated to the most relevant parts, and following off of this hacktrick, I realize that the pin generation algorithm isn’t randomized - it’s based on a few environment variables:

Some of these bits are easy to find - modname is the name of the module in use, which is flask.app. getattr(app, "__name__", type(app).__name__) is just the name of the class in use, which is just Flask. getattr(mod, "__file__", None) wants an absolute path to an app.py file, which we can get from looking at the traceback given to us from before: usr/local/lib/python3.6/dist-packages/flask/app.py.

So most of the public bits are found (we’ll get back to “username” later) - what about the private bits? The hacktrick goes into more detail, but the TL;DR is as so: str(uuid.getnode()) wants the MAC address of the machine. get_machine_id() is defined in the source as a function that wants either the machine-id (on linux install) or the boot-id (on, well, boot…duh) of the machine hosting the server.

How do we find such things? They obviously aren’t available to us in public. Maybe if we can do a directory traversal, we can input traversal commands and look through relevant linux files ourselves in order to get this information.

Let’s return once more to the ?animal= query. Again, give it something it doesn’t expect and inspect the traceback/pin-protected console, and see an interesting piece of the traceback: 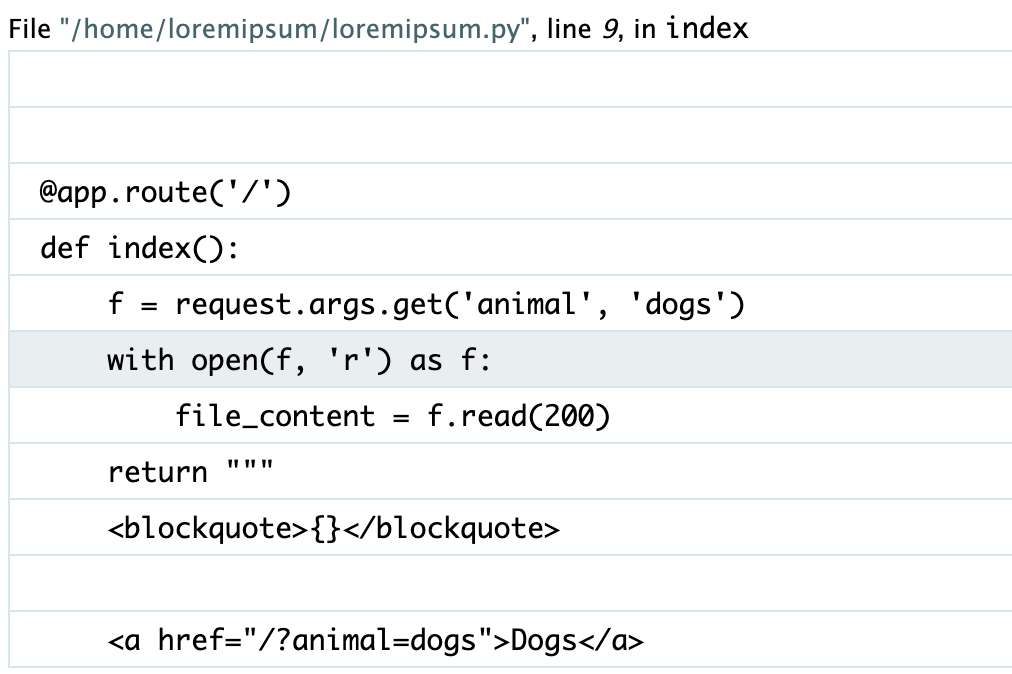 The f variable seen here is the value of the ?animal= query, passed into an open() function to open a file in the server. This means that our input to the query is treated as a filename. We can do directory traversal through the ?animal= query!

Back to the private bits - we can simply traverse to the relevant linux files to grab the information we want.

cgroup (append it to the end of boot-id):

NOTE: you’ll need to convert the MAC address from hex to decimal.

NOTE1: trying to get machine-id didn’t work for me, that’s why I got boot-id instead.

NOTE2: boot-id isn’t stable - a new one is generated each time the server restarts. The challenge went down a couple times and the admins had to restart the server throughout, meaning with each time it went back up, I needed the new boot-id.

And on that note, the username value can also be lifted from the traceback by noticing that there is a “loremipsum” directory branch in /home. Thanks to Filip and Jason who also helped confirm the username value! I initially thought I could grab it by traversing to etc/passwd, but there was a 200-char limit on what was shown to us in the output of that open() call from earlier - I wouldn’t have possibly been able to leak the username from etc/passwd that way. Anyway, Jason mentioned the simple fact that every user will have a named directory under /home and Filip affirmed this by traversing to proc/self/environ.

Altogether, we can modify the source code into a script to generate the pins based on these values we provide it.

Give the script these hard-coded values and get the pin, provide it to the debugger and now you have a python console ready to go!